Canada conducted another express entry draw, allowing applicants to apply for permanent residency via Express Entry. Canada issued 3,900 Invitations to Apply (ITAs) in the latest draw held on August 5. Candidates requires a minimum score of 476 in the Comprehensive Ranking System ( CRS) to receive the invitation.

For most of 2020, Immigration, Refugees and Citizenship Canada (IRCC) have provided 3,900 ITAs every two weeks, via Express Entry. While IRCC deviated from all-program draws between March 18 and July 8 and during that period was targeting candidates in only two specific programs that changed last month. On July 8, IRCC conducted an all-program draw before switching to program-specific draws on July 22 and July 23, indicating that it will continue to alternate between these two categories of draws as things return to normal gradually.

Temporary policy adjustments did not impact the number of ITAs released in 2020, and remained steady throughout the year. The year started in January with two draws of 3,400 ITAs each, followed in February by one draw of 3,500 ITAs and a record-breaking 4,500. IRCC has held 21 draws since March, and given nearly 40,000 ITAs.

Express Entry is the application system that manages the pool of candidates for the three main classes of economic immigration in Canada — the Federal Skilled Worker Program (FSWP), the Canadian Experience Class (CEC) and the Federal Skilled Trades Class (FSTC). 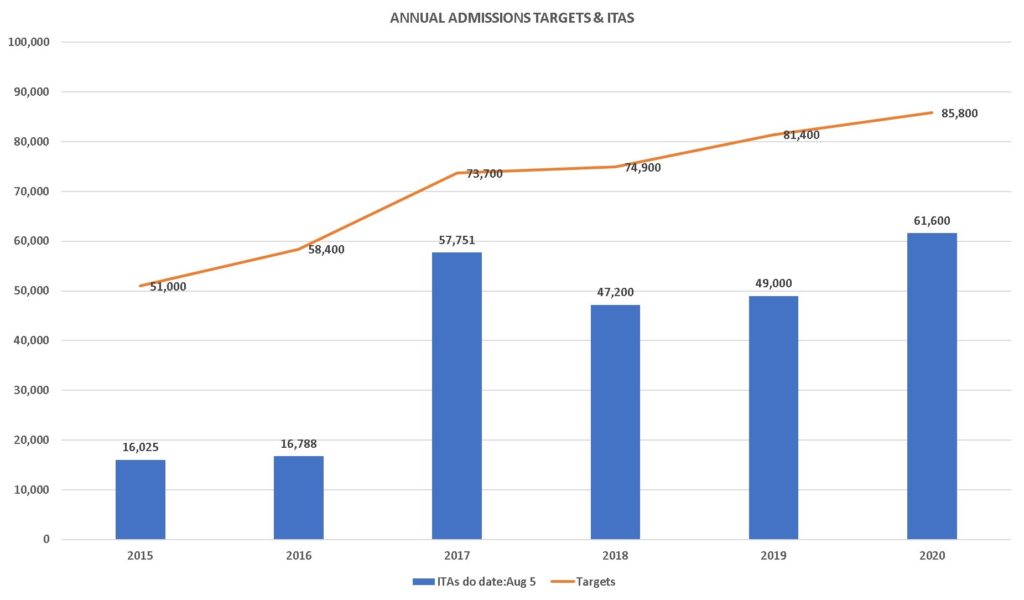 Today’s minimum score of 476 was two points lower than the previous invitation round of all-program on July 8 which had a cut-off score of 478.

The higher CRS cut-off is a result of FSWP candidates receiving ITAs once again. Today included ITAs sent out to applicants with higher CRS scores that would otherwise have been accepted in previous months if IRCC’s Express Entry policies had not been impacted by the corona virus pandemic.

In today’s draw, IRCC utilised its tie-break rule. July 27 was the timestamp used, at 01:02:47 UTC. This means that in this invitation round, all candidates with a CRS score above 476, as well as those candidates with scores of 476 who entered their profile in the Express Entry pool before the specified date and time, earned an ITA.

The tie-break rule is used to rate candidates with the same score on CRS. The CRS score of a candidate remains the key factor in choosing applicants to be called upon to apply for permanent residence.

Under the CRS of Express Entry, qualifying applicants for each program are given a score that awards points for factors such as age, employment, professional job experience and English or French proficiency.

Although a work offer is not necessary to apply under the Express Entry program, additional points are awarded by the CRS to candidates with one.

A fixed number of the highest-scoring candidates will be given an invitation to apply for permanent residency in Canada through regular draws from the pool, usually held every two weeks.